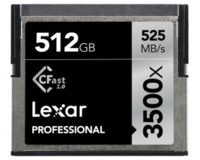 Lexar Professional x3500 CFast 2.0 512GB. Half a terabyte of cinematic quality of the data from Lexar

Lexar launches new, higher capacity, of one of fastest series cards.
Get cinema quality thanks to the CF card from Lexar Professional 3500x CFast 2.0 512GB providing new performance thresholds and more than half terabytes of capacity, so you can easily save the highest quality cinema 4k.

To transfer a read speed up to 525MB/s*, which significantly speeds up the work during post-production.
The cards have been designed to meet the intense demands of the latest generation of cameras class cinema, compatible with CFast.

As each card Lexar Professional Series beyond the
lifetime warranty (realizable after product registration at the distributor: www.myadventure.com.pl) obtain a license to the full version ImageRescue 5 to retrieve lost data even after formatting.